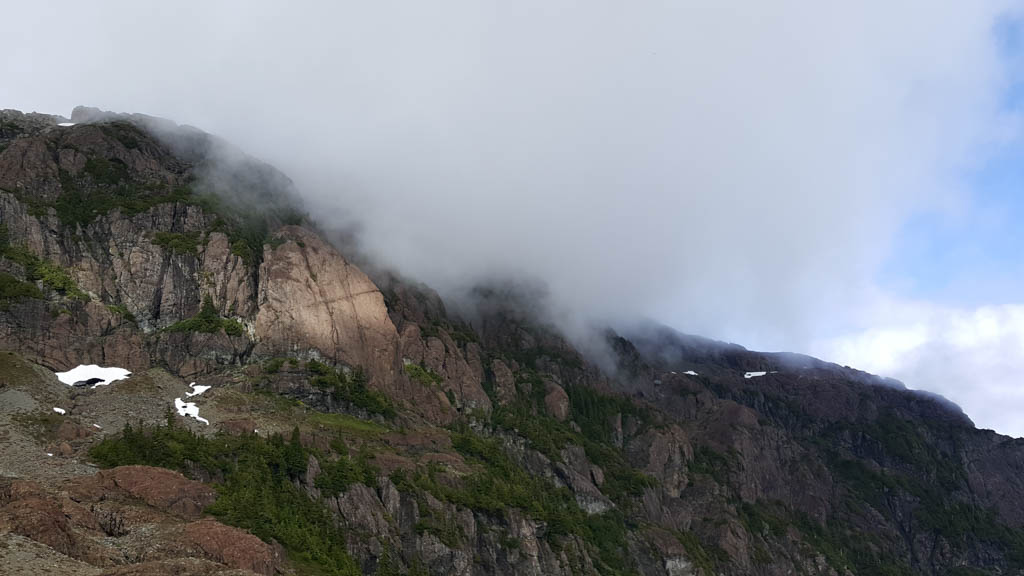 My new friend, Dennis, and I climbed what we believe is a previously unclimbed route in the Alava Bate Sanctuary.

It was both of our first times exploring like this. Just looking at the rock and starting up a line with no idea what was up there.

Our route up the face and then rappelling down the east side gully.

Dennis writing away by headlamp at base camp.

We were up in the middle of nowhere for Summer Camp with the Alpine Club of Canada.

We wrote a version of this trip report in the group log book that evening. The story switches back and forth between his and my perspectives.

Dennis: The first step is the hardest.

Talking about the line. Walking up to the base in the evening sun. Naming the features and then renaming them. I thought it should be called “XY chromosome” but no one could see what I was talking about.

Our self-proclaimed Millennial, Jes, thought it looked like a hashtag and of course heavily promoted the idea until everyone in camp could only see a hashtag.

(Definitely three quarters of a hashtag on the Tlupana Ridge.)

We left the climb until the last day hoping that some valid reason would materialize for us not to embark on such a foolhardy mission. One inch of rain fell the night before. This definitely was a good enough reason to not climb the steep, greasy crack in the valley wall.

Jes, bless her innocent soul, arrived in the kitchen tent and said something like, “I think we should go climb Hashtag!” Well you can’t go say something like that in public without doing something about it.

Alois offered us his rope. Paul exclaimed “That’s a fine aesthetic line.” Tim exuberantly claimed how climbing looked like so much fun.

Some of our gear.

Colleen escorted us to the base of the climb.

Colleen and Dennis enjoying in the view.

Dennis said we probably wouldn’t even get off the ground.  When we actually got to the base, it didn’t look THAT hard. But I could only see a small part of this giant wall. What was up ahead of us?

I asked Dennis what we would do if I couldn’t climb a certain section. He told me if he got himself up there, I would have to dig deep and figure it out.

We started out joking around, as Dennis discovered a blueberry bush right at the start of the wall. He stopped and feasted before even putting in the first piece of gear.

A little bit further up, the climbing became more difficult. He told me it was time to be quiet and focus. We climbed almost completely silently for the next three hours.

Climbing tall walls like this requires that one person climbs for a while protected by periodically clipping the rope to runners that are anchored by various means to the rock.

When out of gear or the rope drag is too great, lead climber then builds an anchor to secure themselves to the wall.

Then the other person climbs up to meet them at the belay station. This is repeated until you get to the top.

Jes belaying Dennis on the second pitch. Photo by Dave.

At 30 meters, I run out of slings. The climbing was a little run out, but a beauty station just ahead. A hanging belay with a little ledge to stand on. Too bad the rock overhanging the ledge forces me to lean out and experience the occasional back spasm.

Jes pops into view. (She has all the gear and runners from the first pitch.)

I climb the face for 50 more meters on either side of the greasy crack but sticking close to it as it offers a great place for anchors.  I tie into a shrub to make a very comfortable belay station.

Jes climbs into view, boldly pulling on bomber holds. “Eeeek!!” She throws the hold over her shoulder and goes for a little monkey swing.

“Get back on the rock,” I politely request.

He yelled, “Get your fat ass off the rope!” Amazing choice in climbing partner I have made, I know.

I get back on the wall and start feeling really stuck.

Besides being a bit shaken, this was the most difficult terrain I had encountered on this route. And it was raining again. And I was climbing with a backpack carrying water and supplies for both of us.

I took a deep breath and remembered the advice a coach told us at a women’s climbing night earlier this year.  She said whenever you get stuck, just move your feet around a little bit.  Look for how you can gain just an inch or so. Take your time.

As it turns out, this climbing coach was actually Albert’s daughter — one of men on our trip. I got to tell him how his daughter helped me get up the wall, which was a real treat.

Dennis giving Albert a hug after one of their other adventures. “Albert gives the best hugs.”

Dennis tried to get me to lead the last pitch, telling me to go look for a way to belay him up.  I climbed up a ways on very easy terrain (but still 100m above the valley floor). I didn’t see anywhere to put gear or any trees to sling.

I climbed back down and sent the more experienced person to figure it out.

To spare my mother’s sanity (hi mom!!), I will not relay the details of how we both got to the top. But we did.

There was happy tears. Yodelling echoed back by everyone at camp below.

We decide to call it Hashtag Octothorp. I think Dennis is slightly annoyed / amused by my excitement over hashtags, so he adds on the Octothorp.

Now for the hard part. How to get back down?

I deliver a little speech regarding the slippery dangerous bush.  Radio crackles with Paul asking us questions about where we are descending, what equipment we have, how long it will take. Realizing that Jes’ back is not getting any better by making speeches, it is time to go.

We walk, slip and slide down the ever steepening heather.

The gully rolls off into the vertical.

Backside of Hashtag Octothorp, sardonically referred to as a “walk off”

I put Jes on belay to slide down the rain slicked heather. She ties a sling around a tree and threads the rope through for the first rappel station.

Walking down to the first rappel station

I rappel first down a vertical moss gully.

In the next gulley down, I find huge bear scat. Biggest feces I’ve seen all week.

Strange, I assume no one has ever asked Jes to keep talking really loudly as she suddenly falls silent.

How does a bear get up a vertical gully? Has it trapped climbers here before?

Did I mention I have a back injury? Climbing is usually fine, but rappelling and hiking can be exhausting and painful.

Yes that is my knee. Comfy moss couch next to the bear scat.

To give my back a rest, I laid down on the wet moss. Dennis set up the second rappel anchored to a sling on an ancient Juniper bush.  I did not care about the bear scat.

But eventually I got up and rappelled again — this time in a little waterfall. After that, we were now more or less on flat ground.

And two of our friends were there to greet us!

Dave took our now completely water logged 70m rope from Dennis. Lenka brought us wild blueberries. She also carried my things back to camp so that I could limp back faster.  We were late for dinner!

I spent most of my week resting my back, enjoying everyone else’s amazing adventures vicariously.  It was fun to return from my own adventure the last day and have everyone’s support and encouragement.  It was such a privilege to be part of this amazing group of mountain-loving folks all week.

What a great adventure……Well done !!!