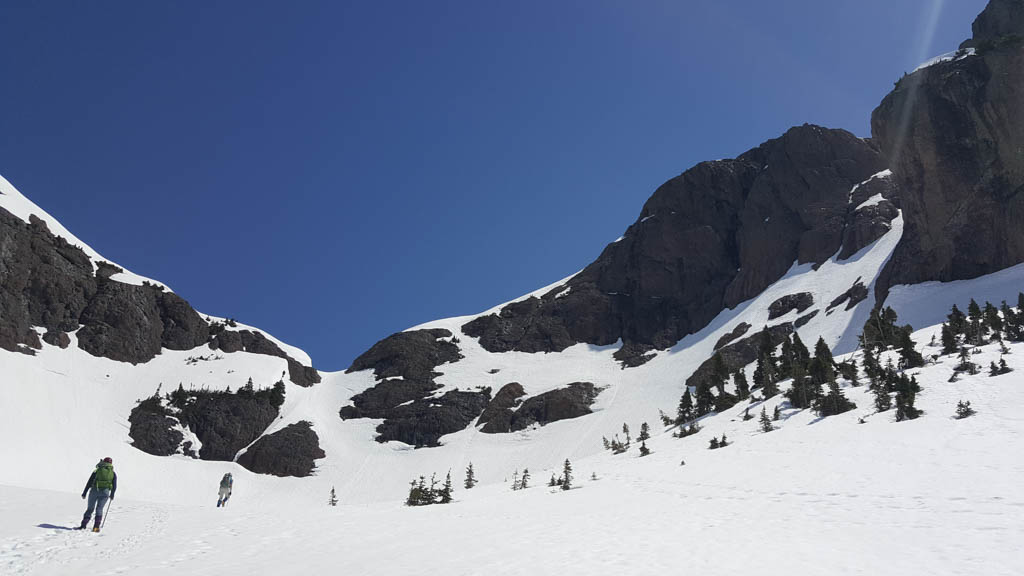 Finally! I got to check the Main Gully checked off my list.

Located near Port Alberni, Mt. Arrowsmith, is one of the fastest ways to get to the mountains from Victoria. Climbing the Main Gully in the spring is an island mountaineering right of passage.

We left Victoria around 6:30 am. It was a sunny and relaxed drive. I felt a bit guilty about how pleasant our morning was. No alpine start. No suffering. (The benefits of late spring climbing.)

We got started on the Climber’s Trail around 10:30am, after stopping to collect a friend from Nanaimo.

Snow started about halfway up the Climber’s Trail. I was in the front at this point. I found lots of spots were I would punch through up to my waist, which the folks behind me could then avoid. It was slow going.

At the first steep spot, we got our ice axes and helmets out.

This was Bernard’s first mountaineering trip and first time using this equipment!

We did a little “snow school” for Bernard once we got to a safe spot. Before you go up on steep snow, it is important to know how to stop yourself with your ice axe in case you slip. Bernard had no fear and just threw himself down the hill over and over again without hesitation.

It had been a few years since I last practiced, so I joined in too. It was like riding a bike and I had no problems stopping myself with my ice axe, no matter which way I slid down.

Feeling confident with our ice axes, on we went!

There was not a cloud in the sky and it felt very hot in the sun.

We moved as quickly as we could through the sun.

We were now near the Main Gully. We stopped in the shade for a snack break and to put on our harnesses.  We brought a 30m rope just in case someone wanted a belay.

I couldn’t tell how I felt about the Main Gully when looking at it.  Was it super steep? Not very steep? Could I do it without a rope?

It’s odd how different slopes look like from different perspectives. As we started climbing, I decided yes it was steep!

The steepest part was around 45 degrees.

As we approached the “no fall” zone, I did not look around. A “no fall” zone is where mistakes have serious consequences. I know two people who have slipped here. They were both seriously injured from being unable to stop themselves from sliding all the way to the bottom.

At the front, Brianna kept checking in with us to see if we wanted a belay. The snow was solid. Everything felt very good.  We kept going.

Once we got out of the gully, Bernard took a turn at the front.

At the top, we bumped into another friend from the Alpine Club! Here are Chris’ awesome photos from the Lost Gully.

We then decided to go back down the Main Gully, which I was a bit nervous about. Going down is always harder than going up!

As soon as we got going Bernard said, “I am having SO MUCH fun right now.” He was not joking. This is what happens when you bring a fearless lead climber mountaineering.

I had been busy thinking about all the body parts that could be dislocated if I slipped, so this was a welcome distraction.

We took it one step at a time and it was totally fine. I was grateful we went down this way so I could face my fears.

Once we got to the more gentle slopes, we practiced a very important mountaineering skill: glissading. This is also known as sliding down on your butt because it is fun.

This was @charliezulu first mountaineering trip. He read Freedom of the Hills and was determined to try all the techniques … including glissading. 😂

Last month, I was really upset about canceling on an all women’s trip up the Main Gully due to a minor and ultimately temporarily injury. I wrote about that here.

My new strategy this year has been not to push myself when I’m injured or tired. Getting up this route a month a later pain-free made me feel like I’m on the right path.

For tips to make your own adventure a safe one:

To do this route, you will need an ice axe, crampons, helmet and know how to use them. Depending on your party and snow conditions, you may also need a harness, rope and other equipment.