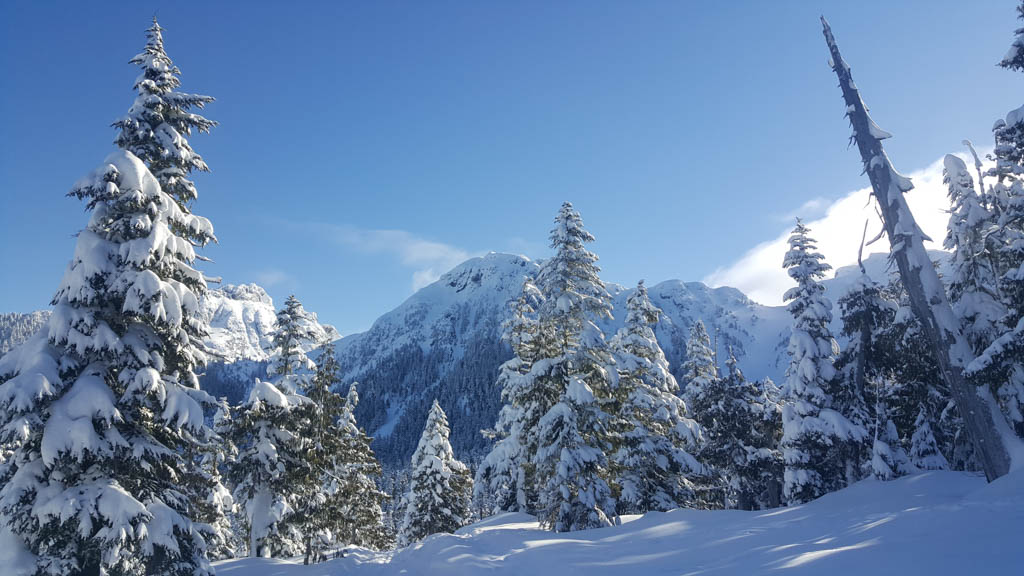 For years, I had heard people talk about this magical place up island. A place with lots of snow and no people. Sounded like my kind of place!.

Without a good car or having many friends who ski, I wasn’t sure if I’d ever get up there. But this year, things finally fell into place with a group of friends from Search and Rescue.

We rented a cabin a month or two ahead of time, which I later learned was considered last minute.

It was a pretty simple place. Beds were foam mattresses on the floor.

It had electric lights and a gas fireplace. But no running water (which means, of course, no flush toilet.) We carried water in large buckets from a nearby stream.

The road up to the mountain was covered in snow. Most people drove up with their trucks and Subarus. But I later learned there was an actual yellow school bus that picks people up from the bottom of the hill.

And and yes — no wifi and no cell phones! Where were in the middle of nowhere.

I understand this is a great place for advanced skiers, but this is not me.

After my epic downhill skiing failure the previous month, I decided to spend my first day just working on my skills on easy terrain.

Another thing that was new to me was the T-Bar. No chairlifts! Instead, you put this little contraption behind you and it pulls you up the mountain.  I had to take a video of it, as every explanation I heard of it was scarier than it ended up being.

Finally my second day, I ventured out onto the blue runs. Instead of the snowplow of shame … I did actually end up SKIING down them.  Hooray.

While I am mostly recovered from last year’s back injury, skiing two full days was just not physically possible.

I am also huge introvert and I had to take a break from friends, even though they are a very funny, awesome and easy going bunch.

So Sunday morning I went snowshoeing by myself.  I walked right out our cabin door and kept going through a little trail in the woods.

A very short while later, I found myself looking at the most gorgeous mountain. Only made better by the fact no one — and I mean no one — was around.

I walked until I found this little abandoned cabin.  Then turned around, as I had said I’d be back at lunch time.

Feeling so grateful I finally made it up to Mt. Cain! Maybe next year, I will be able to tackle something even more exciting than a blue run.

Best waterfalls near Victoria, BC

Thanks for sharing your Mt. Cain experience☺