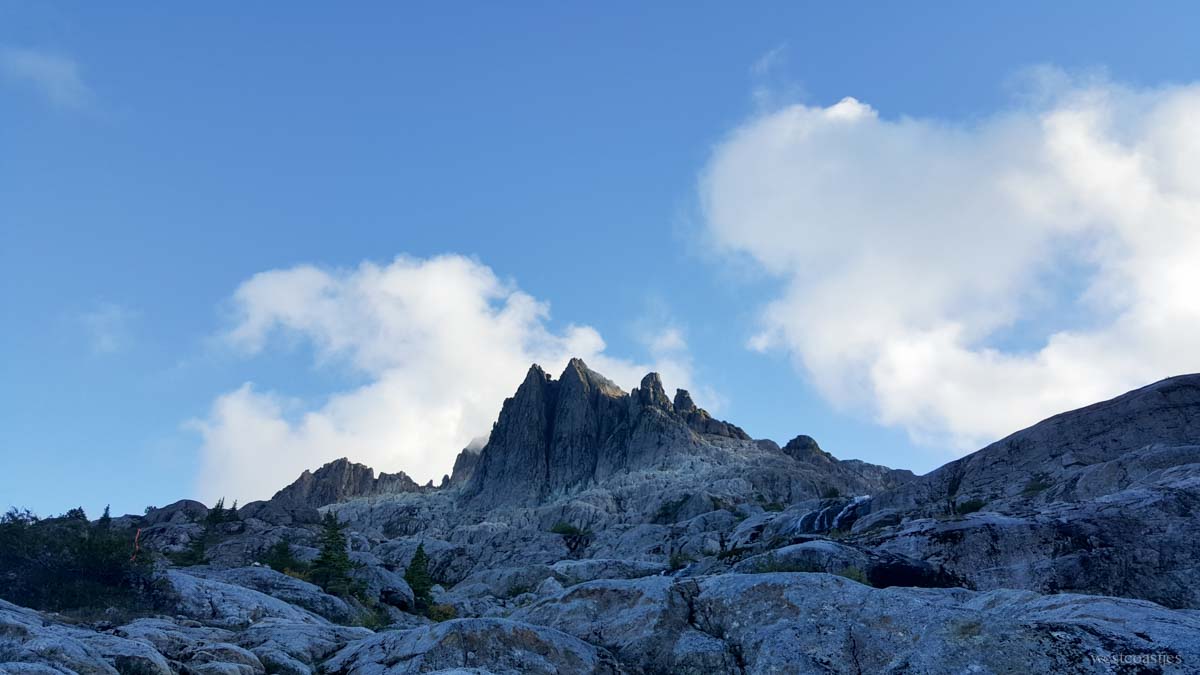 Before winter really started with its short days and heavy rain, my friend and I decided to make our way up Triple Peak.

I’ve see a number of trip reports for Triple Peak on Facebook from my alpine friends, but I don’t really think the average outdoorsy person in Victoria has heard of it before.

Triple Peak is not one of the higher mountains on Vancouver Island, but it has a nice mix of hiking, snow/ice travel (much of the year), and fourth class scrambling at the top.

We turned it into a rather slow-paced two-day trip.

After a rather exciting drive  in Arthur’s 30 year old pickup truck, we started off to our camping spot.

The first part was hiking up a series of waterfalls.

Beautiful, but also a little … steep.

My pack was much heavier than my usual overnight bag with all my climbing stuff, so I felt like a bit wobbly & slow.

We bumped into Arthur’s friend on his way down, and he said there was almost no snow or ice. So we ditched our crampons and ice axes in the bushes.  This made me feel slightly less like I was going to topple over at any moment.

Eventually we made it to the lake and camped!  Hooray for hot chocolate.

Can you see my tiny green tent?

We got to enjoy sunset views of 5040 just across the way.

We decided to sleep in and I set the alarm for 6:30am. However, we were woken up by voices while it was still dark outside.

This at first startled me, until we realized it was just a rather large party of fellow early rising climbers! They were headed up another route, though.

Arthur kept commenting how surprised he was that there was no snow, as earlier this year they needed crampons for most of this middle part of the route.

When we did get to the remaining snow and ice, it was so unsubstantial that it did not stop us from getting across and around it in our regular boots.

Next it was timing for the climbing! We climbed for a bit without roping up.

… and I realized it was time for me and my slippery old boots to be on belay!

This was my first time doing alpine climbing with just a peer — no paid instructor nearby.

Arthur has done more climbs like this than me, but he was usually following someone else’s lead.

I was worried I wouldn’t know what to do or we would face a situation we couldn’t figure out.  But I was never surprised or scared or confused.  It was just like I had been practicing.

We had also been sport and trad climbing together this summer, so that also made things go well I think.

So the climb was completely uneventful … except for all the trees and shrubs we had to fight through.

Can you spot me wrestling with the tree?

Then it was time for the final summit push.

And we made it!

I don’t know why Papa Smurf hangs out in the summit registry … but he does. [Edit: There is a east west traverses of the three peaks called The Smurf Traverse … that is why. Thanks Walter!]

There is cell phone reception up there, so I texted and Snapchatted everyone some photos. One of my friends told me via text I had something stuck in my teeth. (That’s how you know you have a good friend!) So I had to redo my summit selfies.

Second time is a charm.

Rappeling down of course was much more fun and fast.  Whee! Except for having to actually go THROUGH trees at times.

And then we slowly made it back down to camp and then the car.

In the past six months, I’ve ticked everything off my short term list: Arrowsmith, Kings, Albert Edward and now Triple Peak.  What’s next, climbing friends?!?

Climbing Mt. Rainier Without A Guide

Ah the old open book ascent! So many trees to negotiate while climbing. Well played!

Check out Mt. McBride, that was a nice summit