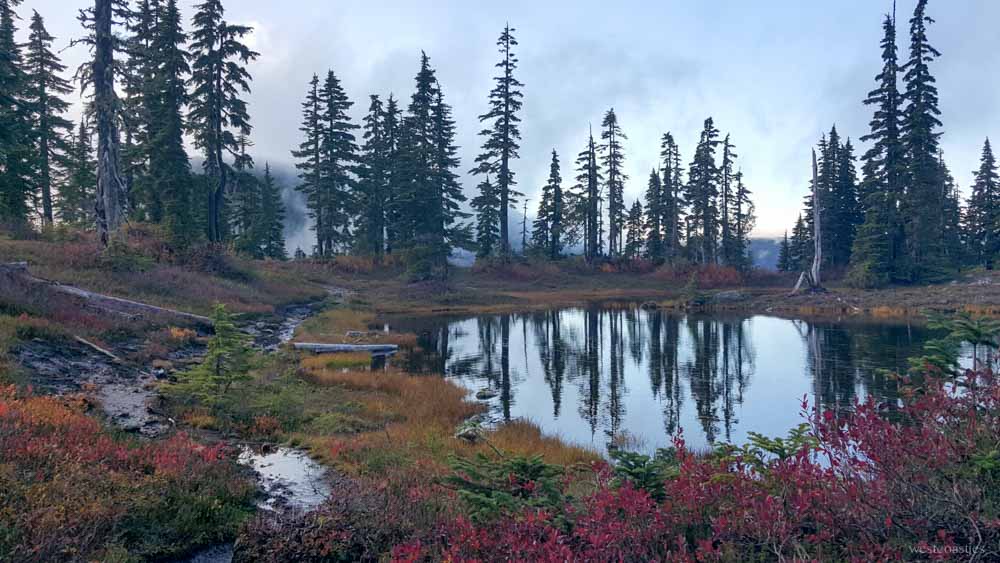 After successfully defending my master’s thesis at the end of August, I collapsed on the couch and did nothing for several weeks. It was necessary.

I did eventually get bored, but still felt like a hermit. So I decided to head up Albert Edward – the sixth highest peak on Vancouver Island in Strathcona Park.

And yes … I did this little two day adventure  by myself!

But yes, I went alone on purpose.

And it was amazing.

I really wanted to test my physical limits, without having the stress of worrying about other people.

I had a late start to my day (3pm) so I hiked very quickly on my way to the first camping spot 10km away at Circlet Lake. I made it in three hours, just before sunset.

My first unexpected interruption was a few minutes out of the parking lot. I saw a black bear! We were almost on top of each other before we noticed, so we were both quite startled. I did not take a #bearselfie. I did however turn on my “bear bell” also known as Spotify playlists on my phone. (I did turn it off whenever I passed someone. To not be rude. Also my music tastes are embarrassing.)

My second unexpected animal-related stop was also very cute and I did take some Instagram worthy photos of that encounter.  Gotta love those friendly Whiskey Jacks.

When I got to Circlet Lake, I followed my NOLS training and made myself a hot drink and then dinner.

Rocking my NOLS swag too.

It was then time for bed deliciously early at 8pm. Because it was dark and I had nothing to do.

I set the alarm for 6am and was a bit grumbly about being greeted by the stars. And a frozen tent.

But I had a 12 hour day ahead of me and it was time to be on the move.

I really don’t like to cut things close when I’m in the back country, but especially not when I am alone. So off I went!

The trail is very steep out of Circlet Lake for the first hour.

As I was climbing up, I made a mistake with my GPS and could not figure out which way the summit was. (There are three peaks up there. My heart was set on Albert Edward.) The overabundance of carins and flagging tape did not help.

I never lost my way back, but I really didn’t want to climb the wrong mountain.  I spent 30 minutes walking back and forth, swearing my my electronic device. Eventually I sat down, had a peperoni stick, took out my paper maps and sorted which way was forward.

And it turned out that about five minutes ahead, Albert Edward & the path to it were completely visible. I felt silly. But that’s hiking alone for you. Just you to blame for such things.

So up the big long ramp I went.

When I got to the summit, I was so excited that I did my first big backpacking trip alone!

At the summit, I saw some clouds about an hour or two away. So turned around and just booked it.

I was startled to see a big group of people approaching the summit as I was coming down, as it was a random Monday in September. Made me feel a bit safer for having company up there, but I really didn’t like the look of the clouds. I guess that’s a perk of having hiking companions — people to help you navigate in the fog.

It still had over 20km to do on the way out. I took an 45 minute break halfway through to eat and have a nap, but other than that I just kept going.

When I had about 2 hours left, I just did not want to be hiking anymore. I stopped and had some nice chats with an older couple at the campground at Kwai Lake.

They couldn’t believe how far I had hiked that day or how much farther I had to go before sunset.  Me neither!

But on I went. Listening to some Justin Bieber and Beyonce on my “bear bell.” And I made it back to my car just in time.

How many women are featured in climbing magazines?...

Wow‼️ Amazing journey, good on you 👍 The photos are incredibly beautiful and your journey was remarkable! Thank you for sharing 💛 You truly have a sense of adventure ‼️

Aww, thanks for your kind words 🙂