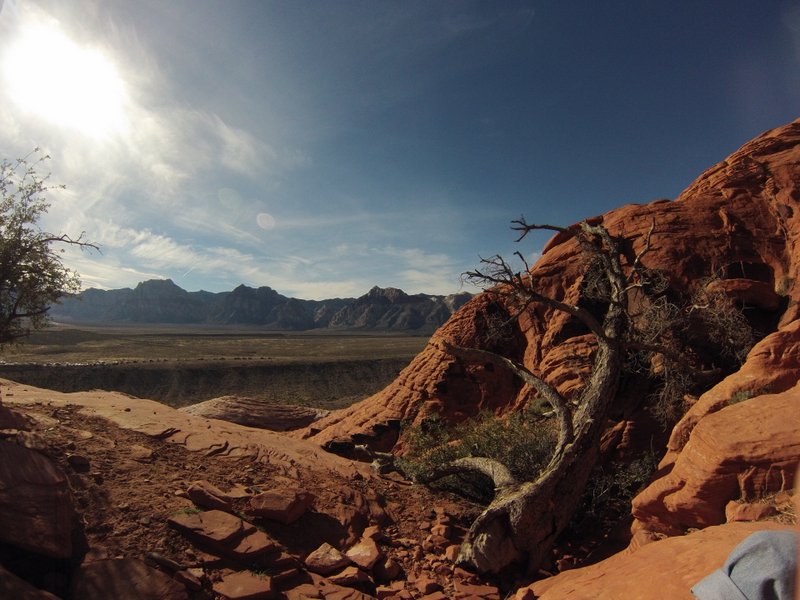 When I told a friend we were going to Red Rock because it seemed like it had good climbing for beginners, she asked me why I was going all the way to Nevada if I was just beginner!

Of course, “beginner” is a relative term. I have climbed enough to know I love it. I spend a lot of my free time during the week and my vacation time in the summer climbing.  But I am still inexperienced enough that many outdoor routes are out of my reach.

So we were off to Red Rock to look for climbing we could tackle and of course we were looking for warm and dry weather. Red Rock delivered on both in unexpected ways.

We drove from BC, which took about three days of back country driving through Washington, Oregon, northern California and Nevada.  It was beautiful and the roads were great, even in late December.  Some routes required we carried chains, but happily never needed to use them.  Roads were clear and sanded/salted, even through the Cascades.

Taken inside a general store in rural northern California. Guns, wine & potato chips all in one place!

We arrived a few days before Christmas at the official campground.  The camping is first come, first serve — and we did not have a problem finding a spot even though everything I read said it might be busy around Christmas.  The outhouses were very clean, running water was abundant. There were elevated platforms filled with sand for your tent, which was very comfy.  We showered one night at the climbing gym down the road for $4.  Grocery stores and coffee shops were only a few minutes drive into town.  Climbing was a few minutes the other way.  Pretty much perfect!

The campground completely filled up right after Christmas as we got closer to New Years.  There is overflow camping in Lovell Canyon, but it would be inconvenient to camp there as it is 20-30 minutes farther away from everything.  Better than having nowhere to go though, as there don’t seem to be many hotels nearby and you aren’t allowed to camp in the park.

The one thing was it was incredibly cold at night in December.  I only had a 0C sleeping bag and Bernard’s was even thinner, so I brought four extra blankets, one for beneath us and three for on top.  We also used the blanket for sitting around the fire.  The weather during the day was very hot and sunny — I was wearing a tank top and feeling too hot!

Hiking around in the park, above Panty Wall.

We spent the first two days sport climbing.  One day we checked out the Panty Wall, which was great for beginners like us with 5.7, 5.8, 5.9 sport routes.  I was able to lead one route and traverse to a nearby anchor so I could top rope it. People there were super friendly and all of us were travelling from out of town.

The second day we went to the Gallery at a fellow climber’s recommendation.  The interesting thing about this area is that the easier routes started on the left and got harder as you went to the right.  We were warned it would be busy, but I had no idea just how busy. The climbs were also mostly too hard for what we felt like doing that day as well.  We climbed a little bit there, but headed out after lunch.

We tried to go to another area in the afternoon, but the sunlight was fading, the approach was way too long and it was confusing to navigate. We didn’t make it to the second spot after all, which was definitely a low point for us.  To top it off, Bernard had gotten a cold and was feeling pretty zapped.

We decided to try another approach for our next two days. On Boxing Day, we headed to the nearby REI in Red Rock and picked up the very last bouldering pad.  (About 30 seconds after we got there, another couple showed up and was very disappointed.)

It was both of our first time bouldering outside. We knew that Kraft boulders had great bouldering, was near the campsite, had a short approach — so we decided to head there without a guidebook.  Not buying a book was something we debating for a while, but I think it was the key to us having as much fun as we did.

We basically just took our new bouldering pad & some snacks and hiked around looking for chalk marks.  Unlike BC where it rains all the time, the routes people liked to climb were very visible.

At first, I was pretty terrified by having to climb on top of the boulders to be done with the problem, as I felt so very far off the ground.  But once I kept climbing and falling — I got less scared of falling.  And topping out became a fun treat.

On top of one of the first boulders I climbed.

There are also a few fun chimneys to be climbed.  We just played around in a very short, relatively safe one on the warm up boulder.

Bernard about to downclimb a mini chimney.

There were boulders that we just admired from afar, such as the Cube. It’s 2.5 stories tall boulder problem, with a V3 downclimb.  The problems we ended up climbing were probably only V0-V2, but we didn’t run out of problems in two days. And there was so much more we tried and couldn’t start. It really was a bouldering paradise.

There are lots of places closer to home that are better suited for beginner climbers (Crest Creek and Nanaimo, on the island, and Squamish on the mainland).  But after reading about the difficult, run out routes other places like Joshua Tree, I was excited to learn there was a place on the west coast where we could winter climb and have some fun.

We bought Red Rock Canyon book for sport climbing, and I would not recommend it.  The photos weren’t very clear and it was difficult to figure out where areas were and what you were climbing.  No one else we saw had this book either.  I’d recommend checking out other guidebooks or shopping at the REI in Red Rock when you get there.

* For climbers that are interested in knowing what levels I climb to help them plan their own trip: I have been climbing 2-3 times a week for just over a year and learned how to climb outdoors this past summer. I have gone outdoor climbing or lead climbing probably about a dozen times. I can climb 5.11- indoors with a top rope and 5.9 lead. I boulder around V4 indoors. Outdoors, the best I have done is a 5.10- top rope & 5.8 lead.

Climbing Mt. Rainier Without A Guide

Learning to mountaineer in the North Cascades

Jes, thanks for sharing your trip with us. Amazing!
Aunt Donna