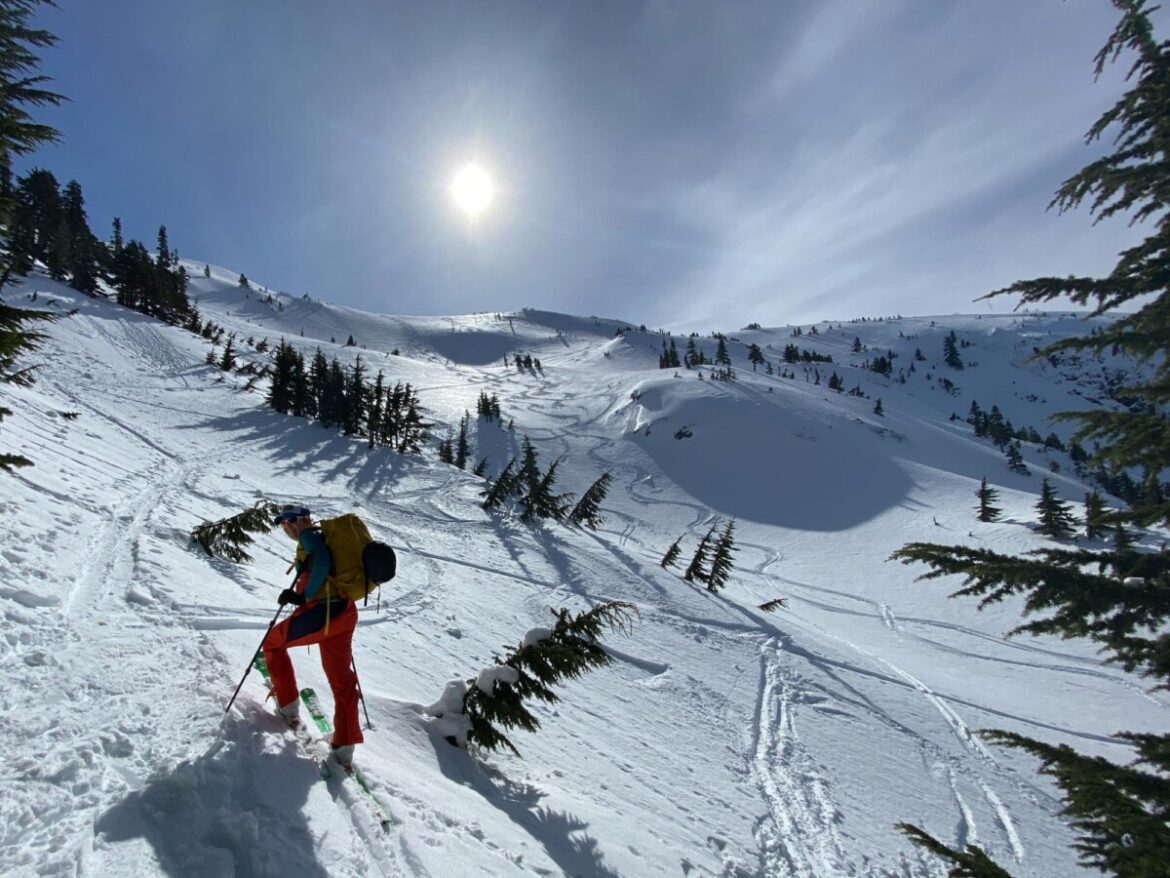 A small group of us ventured out to Mt. Cokely this weekend. None of us had skied there before, but we had enough information to get us started.

We met at 8:30 am at the start of the logging road. The night before we checked the Mosiac website for the hours for Cameron Main. Recently I’ve found Mosaic to be very strict with gate closures. So we knew we had until 5:00pm to complete this mission.

We drove as high as we could with our 4wd trucks and snow tires. We got to 850m elevation, which is one switchback before the start of the climbers trail. Then it was time to skin on the logging road!

I have heard that people head up the either the Saddle Trail or Rousseau Ridge. I’ve heard a lot of people talk about the old ski hill on the other side of Mt Cokely, but I am having a hard time imagining that as a reasonable day trip for most human-powered skiers while Mosiac allows such limited access to the road.

But we kept going until we reached another access point past Rousseau Ridge. We saw some skin tracks heading into the woods where we thought the start of that trail would be (49.25031, -124.60319).

The first part of the trail we chose was a bit steep, but we navigated it easily. Then it was about an hour of gentle skinning up through the forest.

This photo was after the super exposed part was over, as I had been too focused on what I was doing to take a photo!

Then we arrived at the bowl, our skiing objective. The ridge ahead of us is Rousseau Ridge. To the left was the summit of Mt. Cokely.

We skinned up the bowl until we top of the ridge. The wind was howling around us, enough to almost knock me sideways off my skis a few points. A gust blew Erica’s hat off her head and a ski pole out of her hand. (She got the pole back!)

The avalanche forecast described the main danger as wind slabs for the weekend, and we could see why. But the snow where we were felt crunchy and firm. We safely carried on to the top to see the views of Arrowsmith.

Then it was time for our icy slide down. Jessy and Erica are experienced skier and made it look good. Two of us were newer skiers and struggled a bit in the crusty, cement-like snow.

We wanted to take the gully down instead of following the exposed skin track. We couldn’t see around the corner and couldn’t tell if it was a steep drop off something else we should avoid. Erica and I carefully walked down part way and saw that it fine. This is the photo from part way down.

In the photo below, the red shows up skin track along the cliff and the blue shows the gully we skied down. They both join at that point I mentioned earlier in the post, where the paths diverged.

After that it was tree skiing out to the logging road. And the logging road was not quick! We had to put our skins back on for about 30 minutes. When we got back to the car, we changed out of our boots as quickly as possible and booked it for the gate. We got through with just ten minutes to spare. It had a great sunny day with friends!

UPDATE: I’ve learned that people go up the next drainage to the east to the summit, then drop down into the bowl and go down the gully. I’ve also been told that way is a bit easier. Thanks Dave and Martin!

How to make your next trip a safe one

This was complex terrain with steep slopes, convex rolls, terrain traps. Everyone in our group had taken AST 1. We all carried a beacon, probe and shovel. We also had ski crampons because of the steep, icy conditions.

Two people in our group are very experienced with ski touring and they helped the other two navigate the complex terrain.

We checked the avalanche forecast and the weather before we left home. Our group also had several satellite communication devices and first aid kits.