Hiking to Mt. Assiniboine in October and having it all to ourselves 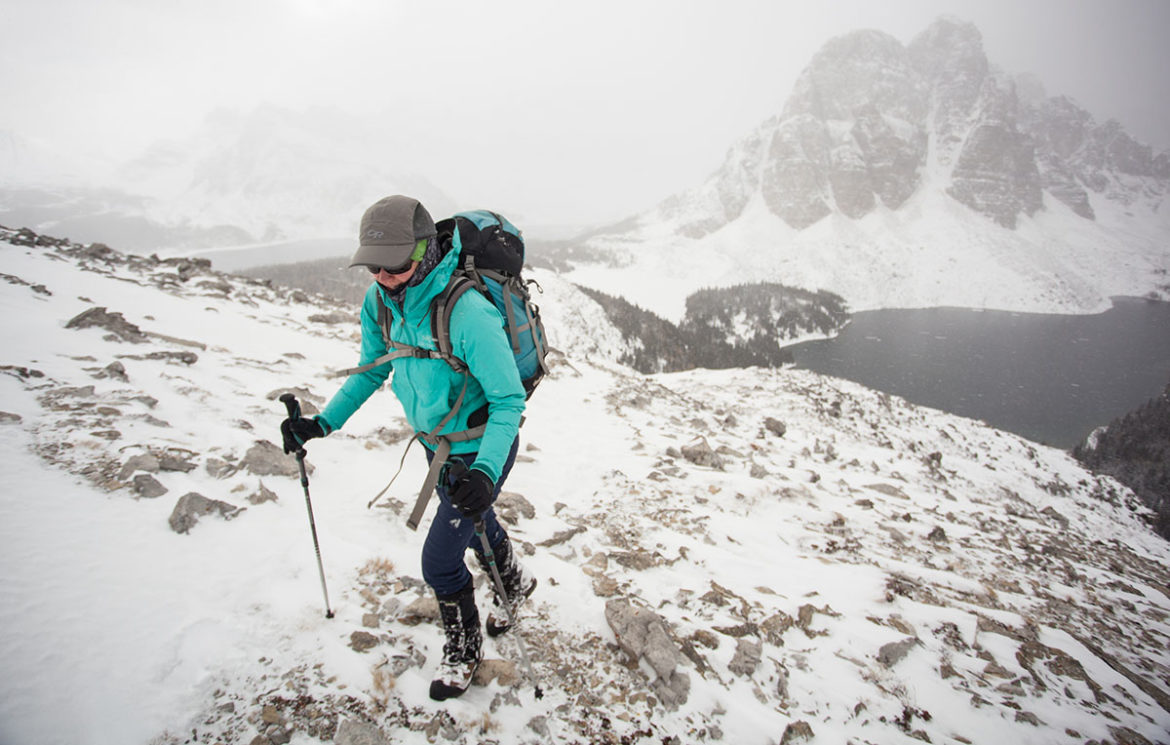 This is Blackfoot, Tsuu T’ina and Ktunaxa land.

Mt. Assinibione is an iconic destination in the Canadian Rockies.

In the summer, the trail is buzzing with helicopters taking guests and supplies to the Assinboine Lodge. Event tent camping camping spots must be booked months in advance.

Which brings us to off season. The fall. Specifically, October. Bitterly cold temperatures keep the summer hikers away. And there still isn’t enough snow for the skiing.

The lodge is closed. The huts cannot be reserved. No fire logs for sale.

Basically perfect for two people who do not like making plans or crowds.

We booked refundable plane tickets to Calgary about two weeks in advance. We crossed our fingers hoping it wouldn’t snow too much before our trip, constantly checking the Assinibione web cam for updates. The weather looked good enough, so off we went!

I flew to Calgary right after work on Friday. Then we drove straight to Canmore, the town closest to the Shark Mountain trail head.

Erica was already in Calgary for work. So she had done the grocery shopping on her own. She had selected some interesting items like a jar of capers, a tubs of hummus and several avocados. Not exactly backpacking food.

I had my own packing requirements. Since it had snowed, I wanted to bring everything in case we didn’t make it to the huts. Tent, sleeping pad, stove, the works.

Between both of our requirements, our bags were stuffed.

When we were making plans, Erica told me it would be a casual 8 hour hike, if we moved slowly and took lots of breaks.

On Saturday morning, I asked her the actual distance was. That’s when she told me 30km. Uphill. In the mountains.

That’s also when she told me most people take two days to do what we were going to try in one.

Needless to say, this was probably going to take us and our giant backpacks more than 8 hours. And we had very limited daylight. So we booked it.

We started at the trailhead and hiked to the typical first night’s camping spot before taking our first break.

We then continued on via the Assiniboine Pass route, the easier of the two routes from that direction. We kept going at a fast pace until the trail started going uphill.

As we took our second break, with the sun setting and the snow falling, I asked Erica if she really needed fresh peppers and a glass jar of curry paste. And we had a little laugh and kept going.

Just as the sun was setting we found a sign that pointed out way to the Naiset Huts. These huts were built in 1925 by the founder of the Alpine Club.

We wandered over and poked our heads inside of all of them. During most of the year, you must reserve a bunk in a shared cabin a year in advance. But in October, they were all empty.

We picked the one we liked best and settled in.

Then Erica made us a nice meal with all the groceries we carried up there! Most of year, people cook in the group shelter. Pots, propane, everything is provided. We carried everything up with us as the cooking shelter is locked in October.

The next day we decided to take it easy and explore.

We hiked out to the famous viewpoint on Nub Peak.

On our way, we were following a number of animal tracks. We kept trying to guess what they were. Until one set of the tracks just ended.

The poor little bobcat had just died. It was still warm.

We examined the animal and couldn’t find any signs of injury. It seemed very skinny, though.

The dusting of snow made it slippery and hard to go all the way to the top. A snowstorm looked like it was going to roll in soon so there was not much of a view. We headed on back down to our cabin.

We did not get up early, which is nothing new. But we decided to take the more strenuous way back anyway.

The snow was deeper as was got closer to Wonder Pass. It getting deep enough that we almost wished we had snowshoes. I was glad it would not be that deep our entire journey.

Wonder Pass was simple spectacular. I am so glad we had a chance to take in those views!

On the way back we saw more evidence of the animals we shared these woods with. We followed some rabbit and bobcat tracks until we again found where one set ended.

On the side of the trail there was remains of a freshly killed rabbit. All that was left was its feet, a lot of blood and excrement.

We kept on moving quickly down the trail until we saw our first grizzly bear tracks! I had never seen evidence of grizzly bears before! Let’s just say I started moving quite a bit quicker and making lots of noise!

At dinner time, we came across another cabin in the woods. There was a guy alone there, who had settled in for the night. He asked us if we were staying there as well.

We told him no, we were hiking back to the trail head. He was completely confused, as it had taken him over 5 hours to get to this spot. We just smiled and kept hiking.

The walk along the mostly flat paths in the dark was rather mind numbing. But we had a fun time reminiscing about all the other trips we had ended in the dark that year.

Eventually we got out and headed straight to our hotel. And we dragged all of gross, dirty hiking stuff inside. And proceeded immediately to pizza.

Day 5: Being a tourist

Since our flight home was later in the day, we had some time to check out nearby Lake Louise. Same views, more people.

I loved my time in the Rockies and can’t wait to go back again!