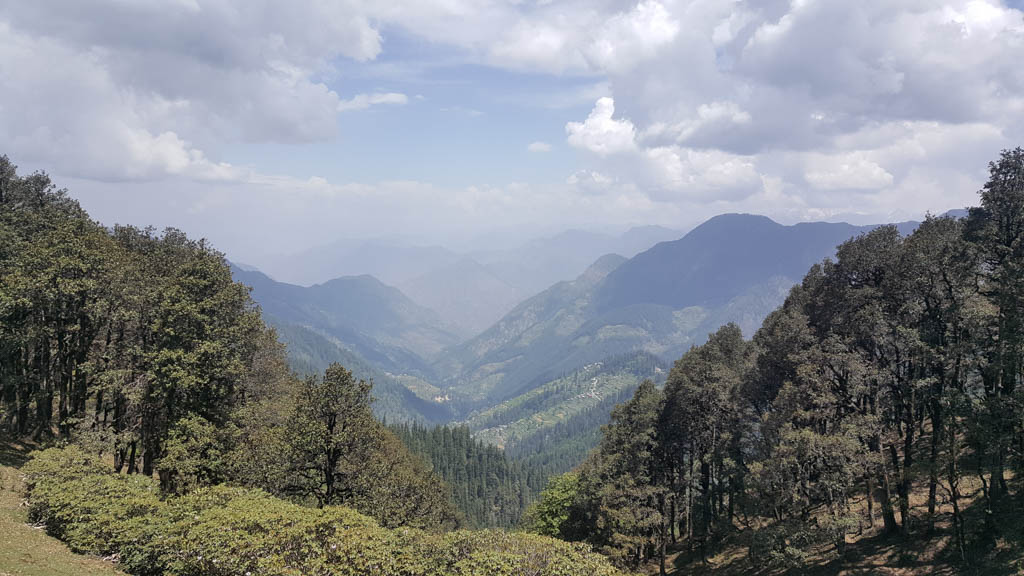 When the opportunity came up to go back to India a second time this year, I was beyond excited.

Since it was summer, the plane tickets to Delhi were cheap. And I had someone to travel with. I met Arpita when I was travelling in India in January and we had stayed in touch. Her work is seasonal, so she was happy to get out of Delhi and go for an adventure.

We hung out in Delhi for two days, which was about two days too long. But it was nice sleep in an actual bed for a night.

The evening of the second day we were off to catch our bus. We were about to be on this vehicle longer than I had been on any airplane.

Foolishly, I arrived at the bus really needing to pee.  I assumed we would catch the bus at a bus station. You know, with a public washroom. But no, our bus was just parked on the side of the road.

I decided to just be super chill and watch the Bollywood movie. (It was playing too loud to listen to music.)

We stopped for dinner about five hours later. I have never been more excited to see a squat toilet.

I woke up the next morning to the most gorgeous views of Himachal Pradesh. I felt like I could have been in BC. But we were in the foothills of the Himalayas!

As seen from the bus

Our bus was heading to the major tourist hub, Manali. We got off the bus early. Arpita had arranged for a driver to pick us up and drive us to a very small village, Jibhi. She had found what we hoped would be a very nice AirBnB.

From this Canadian’s perspective, this was some advanced travel she was pulling off. Arpita travels for a living. So even though she hadn’t been here before, everything went perfectly. Lucky me along for the ride! (Reason #406 to make friends while travelling: they are probably better at it than you are.)

We were not disappointed by our accommodations.

Oh yes, and we arrived with no plans. PERFECT.

I looked at trees.

Checked out a waterfall.

Drank masala chai. Which Arpita made me go order, as she said I had to go learn to do things for myself. Ugh. But she was right.

It took a few days, but we finally got bored. So we followed the path over the river to the village to look for Rana, the owner of the property.

We had masala chai, made with his own cow’s milk. They had some hand-rolled cigarettes with organic tobacco. And Rana helped us make some plans.

Side note: Rana is one of the coolest people I met in India. He had amazing stories to tell about his mountaineering adventures, how climate change is affecting his village and his efforts to pioneer eco-tourism in the area.  Here is a National Geographic article you can read about Jibhi. The author stayed in Rana’s cottages too.

One of the day trips we took was to Manali, which felt a bit like the Whistler … if Whistler was in India.

Thanks to a quick check of Yelp, we found the most delicious food. Arpita kept making fun of me for eating “dead fish.” She does not know what she was missing.

Definitely not scared of the fish eye staring back up at me.

We had a lovely time just walking around most of the day, enjoying nature.

I was really glad we weren’t staying in Manali though. It was just way too touristy and busy.

I am pretty sure they mean “fixed price.”

We hired a driver and a guide. The plan was to go on a little trek to see some 360 views of the Himalayas. I had to work very hard to convince Arpita to do this, as she is not a fan of trekking.

As we kept driving along, I noticed it was getting harder to breath. I thought it was just dirt from the road.

Our guide stopped for us to get out to enjoy the views.  That’s when I realized it was the elevation, not the dust.

I definitely cannot breathe in this photo.

Arpita was fine. She was very concerned about me, but also a bit amused that the hard core hiker could not hike anywhere.

Our guide talked me into finishing the drive up to Jalori Pass.

Once I got up to the pass, I still couldn’t breathe. Apparently this situation gets better with time. So we sat and had masala chai.  Then tried walking again.

It took us about an hour to go what I could have walked up in about 10 minutes at home. But I got my views.

Sadly all good things must come to an end. And back to Delhi we went.

We spent some time in the suburbs, shopping and hanging out with Arpita’s friends and family.

I love malls in other countries. Some people have told me this is weird.

But people in big cities spend their free time doing ordinary things, like shopping and going out to eat. And these ordinary things can be very different in interesting ways.

Selfie outside the mall

We also ended up making a new friend thanks to Instagram! Hannah moved to India from Australia five years ago. I felt so inspired her ability to learn a new language, find work, rent an apartment and make friends in a very different country. (When I was her age, I immigrated to Canada and thought that was hard!)

She took us around Delhi doing urban, cultural things. Also a lovely day.

I also got to experience some monsoon rain! The temperature drop after the rain stopped was delightful.

I just noticed that our three different accents can be heard in this video, which I find rather heart warming. It’s a small world.

Only about ten months left before I am going back to India again!

Poon Hill: A Short Trek in the Annapurna...